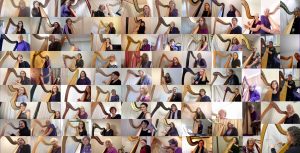 creating an album and YOU can be part of this!

Join this unique experience to play your harp on the Dynamic Harps Album.

Rehearse and record with us during the year online or in person, by the end of the year celebrate with us and hold a professionally recorded CD in your hand with your name on!

Once you have signed up using the form you will received updates regarding the project, including being sent the Zoom link for the live launch session which will take place on the 24th January 2023 8PM-9PM GMT.

9 track Dynamic Harps album recording in 2023 and YOU are invited to be part of this!

The 9 track album will be rehearsed during the first nine months 2023, recorded in October and released in December alongside an ensemble music book compendium, with every performer and supporter of the project named.

There are opportunities to join online or in person. Music is written carefully in order to be accessible to all ages and abilities.

Pre-Recorded Lessons: Once a month a new ensemble pre-recorded lesson will be released, including a teaching video for each individual part, a 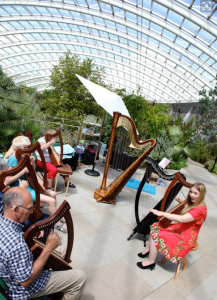 professionally videoed play along for each part and with all parts playing as an ensemble.

Live Rehearsals Online: On the 1st Tuesday of each month we will have a live session to rehearse together the pieces and for students to ask any questions and glitch fix. The replay will be posted following each session.

Live Rehearsals In-Person: For harpists based close enough to Cardiff, the ensemble will rehearse the CD pieces during their face to face meet up sessions over the year. If you are interested in joining the face to face ensemble please email me on info@harpwales.com.

CD Recording In-Person: All harpists from our Dynamic Harps global family are invited to join us in person for The Harp Project ’23 recording retreat on the 13th-16th October 2023 at a beautiful manor near Cardiff, South Wales, UK (accommodation and food on site). We will rehearse and record the CD during this week, alongside enjoying concerts, workshops and a celebration dinner together. 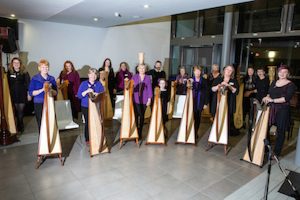 CD Recording Online: The final track of the CD will be an audio collaboration. Harpists from around the globe will be invited to record an audio line for the CD and then have their part edited into the full group performance, thus opening the possibility of everyone being able to join us, even if the in-person recording is not possible. This track will be have parts available to play lap harps without levers (as well as parts for other harp types) to make it as inclusive as possible.

Are you interested? Would you like to know more? Get on the first to know list (look at the top or bottom of this page for the web form) and put the 24th January 2023 8PM-9PM GMT into your diary for the official full launch Zoom session. The live rehearsals begin officially on the 7thFebruary 2023 8PM-9.30PM and will take place February – October on the first Tuesday of each month. If you cannot make the live sessions please remember you CAN STILL JOIN THE PROJECT as you can watch the monthly video lessons and then the replay of the live rehearsals as replay.

Once you have signed up using the form you will received updates regarding the project, including being sent the Zoom link for the live launch session which will take place on the 24th January 2023 8PM-9PM GMT.

© Shelley Fairplay. All rights reserved.
Privacy Policy
Contact Me
Continue Shopping →
Item added to cart.
0 items - £0.00
Checkout
Be the first to know when our new courses are available! 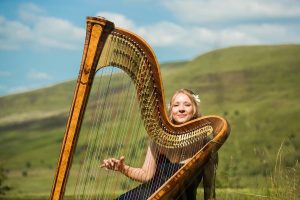